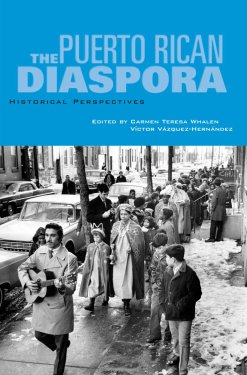 In The Puerto Rican Diaspora: Historical Perspectives, published September 2005, nine contributors, including the book’s two editors, set out to dispel two common misperceptions about Puerto Ricans in the United States; that the majority of Puerto Ricans live in New York City, and that they are recent arrivals to the United States. The price of the book is $22.95.

The 306-page soft bound book, published by Temple University Press, was selected 2006 Outstanding Academic Title by Choice magazine, a division of the American Library Association. In the 10-chapter book, the authors share eight stories of settlement and community building, and focus on the economic, political, social effects of the Puerto Rican migration from 1900 to the present.