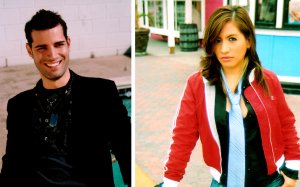 Singers Diana Mera and Frankie Alvarado recorded their first duet single which will be released in May 2007 as the promotional track of Mera’s second album. The song, “20 Pedacitos,” will also be included in Alvarado’s debut album when it’s recorded. Mera, who is also a songwriter, wrote the song in memory of a close friend who passed away. Alvarado recently joined the SGM Records label, the first La Academia USA singer to obtain a record deal.

“When Frankie got to the label, I already had the performer chosen for the duet of ‘20 Pedacitos’ but when I heard his voice, I stopped everything! I even postponed my recording dates to wait until he came back from Puerto Rico,” said Mera, who is a direct descendant of Juan León Mera, a writer and novelist. “I felt he was the angel that I needed for this song that I composed with Dany Tomas, who I respect immensely and who I thank for being an accomplice in my ideas and also for teaching me to fly confidently with my own style.”

“I think people will be able to identify with the song and they will apply their own experiences,” said Alvarado. “Recording with Diana Mera was good and fulfilling. We had a great time at the studio, we joked and everything but always focused on the job.”

According to promoters, “20 Pedacitos” finds it’s genre in pop rock. SGM Records produced the song with Tomas who is a producer and song writer.

Fan clubs for Mera and Alvarado opened in time for the release of the duet. The USA fan club for Mera, MySpace.com/dmera, opened the first week of April 2007. That same week, another fan club was established in Puerto Rico for Mera and Alvarado, MySpace.com/Diana_FrankieFanClub. SGM Records works closely with the fan club presidents. Judianny Ayala is president of Mera’s USA fan club and Betsy Santiago leads the Puerto Rico club.

To listen to a sample from the single duet “20 Pedacitos” with Frankie Alvarado and Diana Mera, click on the play button below.

Certified translator and translation company owner Martha E. Galindo explains why it’s important to reach your clients in language to convey your message effectively. She walks you through the ins and outs of translations issues, how to select a translator, what to expect, how to save on translation costs and much more.

One Response to Listen to podcast – Diana Mera, Frankie Alvarado record duet single to be released May 2007