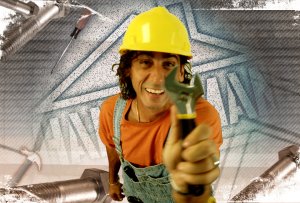 In each dramatic episode of “Handyman,” Gonzalez and his team of colorful handymen will work with a participant to remodel and redecorate a room in their home. Producers expect the modeling rejuvenation to touch the lives of the audience and the participants by providing uplifting inspiration and motivation to those less fortunate or in need. During the first episode, “Handyman” helped a child with a dream of becoming a professional skier, and a mother hoping for her son’s safe return from the war.

Gonzalez is a former member of the “Fonomemecos,” a Cuban entertainment troop. After defecting from Cuba, Gonzalez sought asylum in the Dominican Republic and shortly after arrived in the United States.  Eventually he found his way back to the entertainment business.

In 1995, Gonzalez began a new phase in his career as a radio host for Spanish Broadcasting System’s WXJD, El Zol 95.7 on “El Show de la Mañana.” He then worked on a local Miami television show, “El Mikimbín de Miami,” where he fleshed out a number of characters based on his own life experiences.  Following his television experience he returned to radio entertainment.