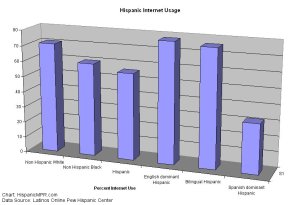 The researchers’ findings indicate only 56 percent of Latino adults visit the Internet; while 71 percent of non-Hispanic whites and 60 percent of non-Hispanic blacks go online. Fox and Livingston believe socio-economic factors such as low educational levels and language limitations play a role in the lower Internet access of this large minority which represents 14 percent of the U.S. market.

The report is based on telephone surveys of 6,016 Hispanic adults between June 2005 and October 2006; and 2,098 non-Hispanic adults in August 2006. Latino respondents had an option to respond in English, Spanish or a combination of both languages.

Latinos also access the Internet by cell phone. More than half of Latino adults (59 percent) have a cell phone and almost half (49 percent) of Latino cell phone users say they send and receive text messages on their phones. On the flip side, a quarter of Hispanic adults have no cell phone or Internet connection.

The Pew Internet & American Life Project and the Pew Hispanic Center are non profit initiatives of the Pew Research Center.  The mission of the Pew Hispanic Center is to improve understanding of the Hispanic population and chronicle their impact on the country. The Pew Internet & American Life Project looks at the social impact of the Internet.