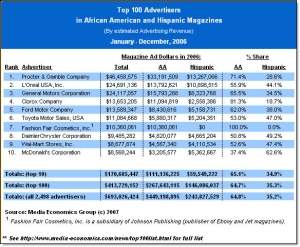 The Media Economics group tracked 2,494 advertisers last year to discover they spent $693.0 million in 2006 to reach multicultural consumers via African American and Hispanic magazines. On average, these advertisers spent nearly two-thirds (64.8 percent or $449.2 million) of their budgets on African American magazines with the balance (35.2 percent or $243.8 million) on Hispanic magazine ads.

These estimates are based on an analysis of the nearly 100 multicultural magazines tracked by Media Economics Group’s BlackMagazineMonitor and HispanicMagazineMonitor competitive intelligence services.

According to the Media Economics Group findings, there was a wide variation in how the largest advertisers divided their budgets between African American and Hispanic magazines. Some companies spent more than average on African American magazines in 2006. Examples, include: Rocawear (98.8 percent of spending in AA magazines), Pfizer (93.4 percent), PepsiCo (91.6 percent), Nike (89.6 percent), K-Swiss (85.5 percent), American Express (79.1 percent), and Kraft Foods (78.3 percent).

Although the top 100 advertisers are targeting Hispanics and Blacks via magazines, last year most mid-sized advertisers focused exclusively on one segment. Two-thirds of the 604 advertisers who spent between $100,000 and $1 million in 2006, advertised exclusively in either African American or Hispanic magazines.

“While this strategy may make sense for some advertisers to efficiently reach their targets, it may suggest that many exclusive advertisers (e.g. adidas, Citizen Watch Company, DirecTV, Playtex Products, Reebok, S.C. Johnson, Splenda, Wendy’s, etc.) are missing opportunities to reach part of their markets. Savvy publishers should target those exclusive advertisers to increase market share and generate new spending in their segment,” said Carlos Pelay, president of Media Economics Group.