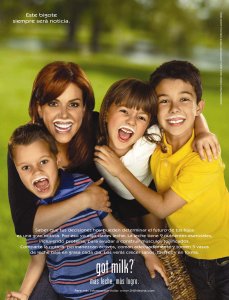 Promotional materials point to a 2005 study on weight loss in African Americans by MB Zemel, J. Richards, A. Milstead, and P. Campbell that indicates drinking low-fat and fat free milk may be good to develop strong bones, help adults maintain a healthy weight and build toned lean muscle mass; and data from the Centers for Disease Control and Prevention (CDC) indicating that more than one third of Hispanics in the United States are obese.

“I am thrilled to be a part of this campaign because as a celebrity I think it’s important to try to convey useful, health-related information to Hispanics. And that is very important given the high obesity rates amongst Hispanics.” said Arrarás.

Although most people focus on what’s on their plate when thinking of maintaining a healthy weight what’s filling their glass may also be important. Milk campaign promoters point to a 2006 study by VS Malik, MB Schulze, and FB published in the American Journal of Clinical Nutrition that indicates that over the past 30 years there has been a significant increase in the consumption of sugary soft drinks while milk consumption has declined. They believe the increase in consumption of calorie and sugar filled drinks may be linked with unhealthy weight gain and high levels of body fat among children and teens.

“We consume a lot more calories from our drinks than we are aware of. Our kids are faced with a lot of beverage choices and we need to help them navigate through these choices. Milk is nature’s ultimate beverage. It’s the only beverage that naturally contains 9 nutrients including calcium and protein that help maintain a healthy weight and builds lean muscle mass,” Arrarás.

Parents are instrumental in teaching their kids healthy eating habits from an early age. Although there were no Latino specific studies cited, promoters pointed to a 2004 study published in the American Journal of Clinical Nutrition indicating that the children of moms who regularly drink milk and make it available at family mealtimes are more likely get enough calcium as they enter adolescence, a critical time for bone growth and development.

Arrarás is an Emmy award winning journalist and one of the best known TV news personalities on Spanish language television. The Milk Processor Education Program (Milk PEP), is funded by the nation’s milk processors, who are committed to increasing fluid milk consumption. The Milk PEP Board runs the national Milk Mustache “got milk?” Campaign, a multi-faceted campaign designed to educate consumers about the health benefits of milk. The tagline “got milk?”(R) was created for the California Milk Processor Board by Goodby Silverstein & Partners and is licensed by the national milk processor and dairy producer groups.