Pew Hispanic Center: most Latinos believe armed forces should be brought back from Iraq

Percentage of population that wants U.S. troops to return home 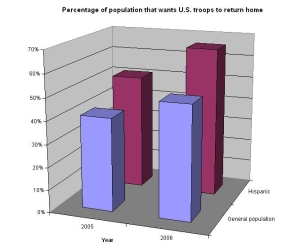 According to the recently released results of a Pew Hispanic Center telephone survey, Latinos are disenchanted with the Iraq war situation, and feel more strongly than the general population that U.S. troops should be brought home.

Of 1006 Latinos surveyed, 66 percent feel U.S. troops should be brought home from Iraq as soon as possible; compared to 51 percent a year earlier. The number of Latinos who favored keeping troops in Iraq until the situation was more stable declined from 39 percent a year ago to 19 percent.

A survey conducted in December 2006 by the Pew Research Center for the People & the Press, indicates 50 percent of the general public favors bringing U.S. troops home; up from 41 percent a year earlier.

At the same time only 24 percent of Hispanics surveyed think the U.S. made the right decision in using military force compared to 31 percent in August 2006. This is in contrast with 42 percent of the general public according to the Pew Research Center survey of December 2006.

The Pew Hispanic Center indicates that although Hispanics as a group have a more negative view toward the war compared with the rest of the population, the most recent findings show an even stronger opposition, especially when it relates to keeping troops in Iraq.

The Pew Hispanic Center survey, described as nationally representative, was conducted by English and Spanish bilingual interviewers in the language of preference of the respondents. The sample was drawn with Random Digit Dialing methodology. The survey has a margin of error of plus or minus 3.1 percent.