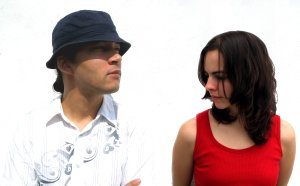 The duo met in New York while working on a project with Ivan Benavides (Sidestepper, Bloque, Carlos Vives). A creative collaboration between the two led to the formation of Pacha Massive in 2005. Pacha Massive landed an impressive first gig opening for Colombian rockers Aterciopelados at Madison Square Garden and has since gone on to share the stage with artists like Ozomatli, Sidestepper, and Yerba Buena.

Nova’s Dominican roots exposed him to a lot of traditional music like palo in addition to music from England and the U.S. played on Dominican radio. As a youth he built instruments out of whatever he could find, using cans for drums, 2 X 4s, and rubber bands.

“When I came to the U.S. I got my first instrument on my 15th birthday, a drum set, and as the years passed I picked up guitar, bass, keys, percussion and finally the instrument that allowed me to solidify my ideas in a flexible and efficient way….a Mac,” said Nova. He describes his musical influences from people “who have influenced me in the way I make music” citing Bruce Lee, Benjamin Franklin and Leonardo DaVinci as “people who had a bigger perspective and were more holistic in their craft.”

Maya was born in Colombia and raised in New York City’s Washington Heights. Her love of music also started at an early age with the violin, and later became a career choice when she went to Cuba after graduating to study double bass. Her musical influences range from classical, salsa, bolero and traditional Colombian folklore to reggae, house and artists like Manu Chao, Hector Lavoe and Sidestepper.

To listen to the single “Don’t Let Go” from the new Pacha Massive album “All Good Things” click on the play button below.