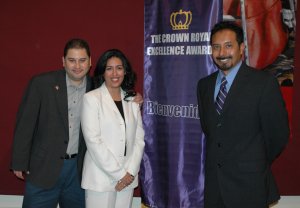 The award recipients were selected informally from a pool of individuals known to LULAC officers. The selection was based on the individual’s advocacy and commitment to issues of long standing importance to Latinos. Each of the award recipients received a custom-made ring crafted by jewelry designer Michael Spirito, of Exhibitionist, NYC.

“Not only have they been successful in their own life, but they have made a contribution to their community. Another criteria, is that they had not been recognized before,” said Marcos Rincon, executive director of the LULAC National Housing Commission. 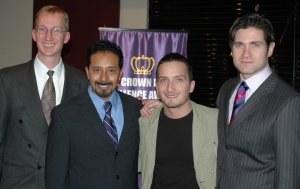 Aide Castro is a real estate entrepreneur and salon beauty owner who created Lynwood’s home buying seminars where she offers free credit counseling and helps families achieve their dreams of home ownership. Castro serves as commissioner of the Lynwood Block Grant Advisory Board, and is also a board member of the Lynwood Athletics Community Services.  She is a member of the Lynwood Chamber of Commerce and was recently named executive director of the Center for Community and Family Services Inc.

Edward Acevedo is a community activist known for his commitment to enhancing educational opportunities. He is a teacher for special education in the Long Beach Unified School District and is the founder of Open Hands of Long Beach, a grassroots organization devoted to strengthening families through early literacy, anti-gang initiatives, and programs for the elderly.

Robert Herrera is an activist devoted to educating others about human rights.  Robert works to improve the achievement level of local youth and has taken a leadership role in gang prevention and immigration reform advocacy. Robert is currently LULAC’s vice president of the Great Long Beach Council 3088 and treasurer of District 7.

The League of United Latin American Citizens (LULAC) is one of the oldest and largest Latino civil rights organizations in the United States. LULAC goals are to advance the economic condition, educational attainment, political influence, health, and civil rights of Hispanic Americans through community-based programs operating at more than 700 LULAC councils across the country.