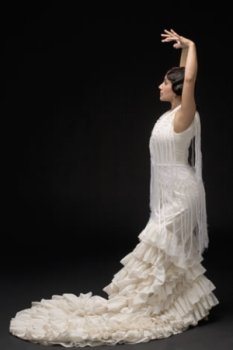 Miami, Florida — Eva Yerbabuena, described in promotional materials as one of the biggest names in the flamenco world, will make her Miami debut, along with her company of dancers and musicians at Carnival Center for the Performing Arts on Saturday, December 2 with a second performance on Sunday, December 3. The performances of Eva Yerbabuena Ballet Flamenco, presented by Carnival Center in collaboration with Fundación Autor, will take place at 8 p.m. in the Sanford and Dolores Ziff Ballet Opera House with cost of admission beginning at $15.

For the first time in Miami, after sellout shows and superlative reviews in London, Paris, Tokyo, and New York, Yerbabuena and her company promise Miami audiences “an expressive, intense combination of palos, the varied subsets of flamenco, including buleria, guajira, alegrias and seguirilla.”

As a child growing up in Granada, Eva Yerbabuena studied with some of the great teachers of the city, traveling to Seville to study dramatic arts when she was in her teens, and later to Havana to study choreography with Johannes García. In 1985, she began dancing professionally with Rafael Aguilar and then joined Paco Moyano in a Hispanic–Cuban production. Over the next few years, she collaborated with other flamenco artists, including Javier Latorre, Manolete, and Merche Esmerelda.

In 1997, she appeared in “Flamenco Women,” a documentary by filmmaker Mike Figgis, who also directed “Leaving Las Vegas.” In the same year, she choreographed her first full–evening work, “La Garra y el Ángel.” A year later, the choreographer Pina Bausch asked her to dance at her company’s 25 anniversary celebrations in Germany, where she appeared with Mikhail Baryshnikov.

The same year, she choreographed her show “Eva,” which had its premiere at the Seville Biennale. She followed with “5 Women 5.” In 2001, she appeared in “Hotel,” an experimental film by Mike Figgis, with John Malkovich, Burt Reynolds and Selma Hayek. Soon after, she appeared in “Pulse,” Stomp’s award–winning IMAX film. Yerbabuena received the prestigious Giraldilla award at the Seville Biennial, was awarded the Flamenco Today prize three years in a row, the Spanish National Dance prize in 2001 and a Time Out Best Performance award for her British debut in 2002.