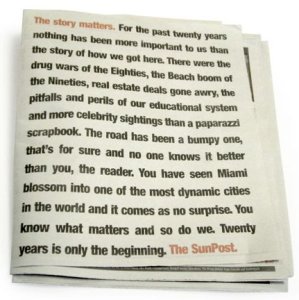 Turbulence received the Self-Promotion recognition for its Corporate ID package and the Editorial Design for Newspaper award for the Manifesto cover design for Miami’s newsweekly, the SunPost. That same entry has also earned the agency awards at the New York Festival, Davey Awards and the Miami Addy’s. Turbulence executives believe the agency’s “open culture” is paramount to its success.

“The Create Awards was launched to showcase the amazing work being done by companies like Turbulence,” said Jerry Brown, publisher and editor of Create Magazine. “Our judges, from multiple creative industries, judged entries based not only on the freshness of the concept/piece, but also its ability to engage the audience. The multiple wins by Turbulence shows that they know how to do that very well.”

Any paid creative work produced for commercial purposes which appeared in the marketplace between January 2005 and June 2006 was eligible for an award. Nineteen judges picked the winners in 10 industries, 40 categories, and 300 subcategories from among 1,500 entries.

“Continuing to be recognized for our work is very satisfying, but even more so when it  is acknowledged by industry peers, such as Create Magazine, that truly value the power of great ideas and creativity to solve business challenges,” said Tom Moleta, Turbulence president.

“Ideas happen, but you have to create the right atmosphere and culture to provide smart people the opportunity to generate great ideas,” said Jose Reyes, partner and creative director. “We’re proud that our hard work has paid off, but more importantly, we have fun doing it.”

Founded in January 2005, Turbulence is a “strategic and creative agency, focused and committed to developing breakthrough ideas and solutions to shake things up and move brands to a better place within their business category.” Turbulence’s clients include The Collection, Miami City Ballet, Humana Healthcare, SunPost, Benihana, Doraku Sushi, Ocean Drive magazine, Euphoria Water, Food and Drug Administration and pro bono work for HELP, Inc. and Suited for Success.

First published in 2001, Create Magazine is a quarterly publication that provides creative professionals with an insider’s perspective on the people, news, trends and events that influence the local advertising and creative production industries. With editions in 16 markets nationwide, each issue features articles by local community leaders on the Advertising, Design, Printing, Photography, Film & Video, Animation and New Media industries.