New film, America 101, looks at lighter side of immigration 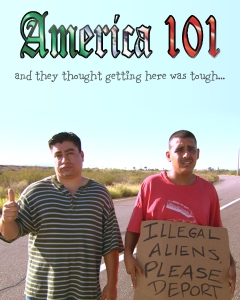 Immigration has become one of those subjects people stay away from in order not cause conflict. Those who touch on the subject are ready for debate. They come prepared with statistics and family anecdotes, all politically correct of course.  Not everyone has the boldness of comedian Carlos Mencia who will openly make fun of the process and the immigrants themselves. Mencia believes we take ourselves too seriously and we need to laugh more often, even at our own expense.

According to promotional materials, America 101, is on the same track as Mencia, although not as bold and not offensive. Rather than trying to drill the seriousness of the matter with lectures and statistics director Mark A. Russell chose laughter for his film. When speaking after a screening Russell described his strategy, “Most people would rather be tickled than hit over the head with facts.”

The film chronicles brothers Angel (Miguel Castro) and Carlos (Miguel Azurdia) taking a journey in order to reach the American Dream. In an effort to save the family business they leave Mexico. After a few comical events they find their way to Tucson, Arizona. Although they make it into the United States, an ironic twist causes them to make their way back to Mexico.

As the writer and director of the film Russell made it a point to not take away from the considerable danger undocumented immigrants face when crossing the border. America 101 is an effort to show the realness of the immigrant’s story without turning it into a documentary or a political statement.

The film has been shown throughout the country at various film festivals. It was an Audience Award Winner at the Golden Film Festival in Golden, Colorado. it is also available at retail and rental outlets. — Melissa Gonzalez

One Response to New film, America 101, looks at lighter side of immigration