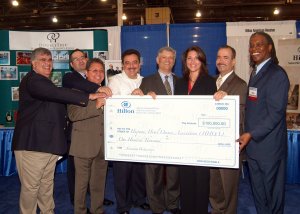 “From its inception, Hilton Hotels Corporation has been supportive of our vision,” said Angela Gonzalez-Rowe, president and founder of HHOA.

The Association was formed as a result of Hilton’s outreach seminar “Hospitality 101.” During the seminar, minority entrepreneurs were trained on the basics of hotel development.

“We are pleased to support HHOA on its mission and believe our involvement speaks volumes on our commitment to Diversity,” said Floyd Pitts, senior director of diversity programs for Hilton Hotel Corporation.

The association is one of the many minority based hotel industry organizations. Others such as the National Black Hotel Owners Operators and Developers (NABHOOD) and the Asian American Hotel Owners Association (AAHOA) have also received support from Hilton.

The non-profit organization is headquartered in Washington, DC. Its mission is to increase the number of Hispanic owned and operated hotels. In addition, HHOA representatives would like to see more executive level employment opportunities within the lodging industry.  Hilton Hotels Corporation is a leading global hospitality company, with more than 2,800 hotels in 80 countries. – Melissa Gonzalez