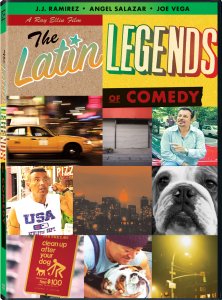 The DVD features uncensored performances by Vega, who has toured with Chris Rock and Marc Anthony; Salazar, seen on “In Living Color” and “Showtime At The Apollo;” and Ramirez, a regular on Comedy Central and Showtime.

Part stand-up comedy concert and part documentary, the recording showcases the struggles and successes of the first Latino comedians who, over twenty years, broke into and became pioneers of New York’s stand-up comedy scene.  The comics have been friends from the beginning of their careers. The DVD is presented in widescreen and features English stereo sound and English and Spanish subtitles.