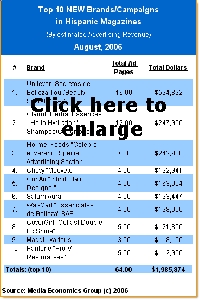 The strong showing by the Automotive category is especially promising given that weak spending in this category has dampened overall year-to-date ad spending in Hispanic magazines.  On a YTD (year to date) basis (Jan-Aug), Automotive spending is still down by 2.7 percent from the previous year.

Besides YTD weakness in the Automotive category, closures of major titles like Shape en Español this year, and Cristina and Nuestra Gente in the latter part of 2005, have also hurt YTD comparisons.   Through August, ad dollars are up by 16.5 percent while ad pages are down slightly (-1.6 percent).

Carlos Pelay is founder and president of Media Economics Group, a research firm which provides advertising competitive intelligence services for the multicultural market.