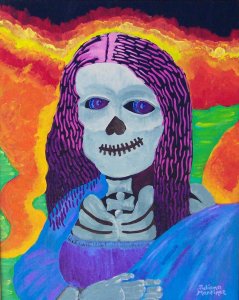 “Mona Lisa” and “Girl with Pearl Earring” by Juliana Martinez

“A baile is a dance, and if you see a group of people dancing, they are dancing to the same music, but each has their own approach. That is very much what this show is like,” said gallery owner Jazmin Ferrari.

Eduardo Bonilla’s talent was discovered early in his childhood. He has already had 35 exhibits and ten solo shows. Bonilla portrays the journey of his life in his paintings. Juliana Martinez was also an artist since childhood. The Puerto Rican born artist has made California her home. Her focus is on enjoying the present. Unlike so many others in her field she does not focus on social commentary.

Ernesto de la Loza uses a canvas of a different scale. He is a muralist in the Los Angeles community. Since 1974 he’s poured his life into murals through out California.  Ricardo Duffy’s approach is at the other end of the spectrum. With a mixture of dry humor and social commentary Duffy displays his version of present day life. — Melissa Gonzalez