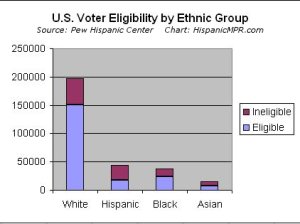 According to the latest Pew Hispanic Center updates, 17.2 million Hispanics or 8.6 percent of voters, will be eligible to vote in 2006. That represents an increase of 7 percent over the 2004 election when there were 16 million Hispanic voters representing 8.2 percent of eligible voters in the country.