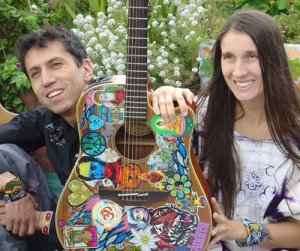 Aterciopelados, the platinum-selling, Grammy-nominated pop/alternative Colombian band is back. They will be releasing “Oye,” their first new studio album in five years on October 24. It is the follow up album to “Gozo Poderoso” and will include the single “Complemento” (Nacional Records)

With the critical and commercial success of their previous Grammy-nominated album “Gozo Poderoso,” Aterciopelados landed on the Top 10 of the Billboard Top Latin Albums chart and made an appearance on the “Tonight Show with Jay Leno.” Aterciopelados means velvet ones in Spanish.

“Oye” is described in promotional materials as an organic rock sound reminiscent of the band’s early work on albums like “La Pipa de La Paz” (Peace Pipe).  “Complemento,” the album’s first single, is designed to be an upbeat declaration of love from someone who has found her soulmate. The album also features Aterciopelados’ trademark social and political commentary on songs like “Oye Mujer” which asks of women “are you a human being, or the erotic fantasy of some guy?”  Another song, “Pace,” is a call to action for peace.  In support of the new album, Aterciopelados will kick off a major market U.S. tour in late October and will return to the States for additional tour dates in 2007.

Aterciopelados formed in Bogota, Colombia in the early 90s debuting with the 1994 album “Con El Corazon en La Mano” rising to fame in Colombia and internationally. They have performed at the Hollywood Bowl and Mexico City’s Auditorio Nacional.

To listen to the single “Complemento” from the new album “Oye” click on the play button below.