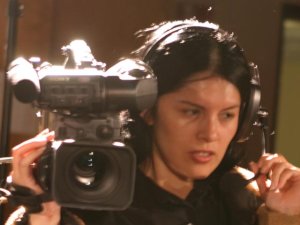 A podcast interview with Mabel Valdiviezo, producer and director, “Soledad is Gone Forever” is available in the Podcast Section of Hispanic Marketing & Public Relations, HispanicMPR.com. During the podcast, she discusses making films for Hispanic audiences with Elena del Valle, host of the HispanicMPR.com podcast.

Mabel is a principal of Haiku Films. She is the writer, director and producer of the short films “The Water’s Muse” and “Strange Machines: Music Boxes” that screened at the International Latino Film Festival and the de Young Museum in San Francisco. In 2005, Mabel was series producer and editor behind Peralta Community College Television’s (PCTV) new program “Talk Back,” a fast-paced show that brings the current issues faced by San Francisco’s East Bay communities into sharp uncompromising focus.

“I am a filmmaker born in Peru, a country whose human rights violations duplicate those committed in Chile under the infamous Pinochet era,” said Mabel. “The memories of those atrocities affected a whole generation of exiles, who, like myself, have started the healing process by freeing our voices and telling our stories.”

Mabel is currently developing the feature length version of “Soledad Is Gone Forever.” She is also developing “Silhouettes,” a series of short documentaries exploring emigration/immigration through the eyes of Carlos Cartagena, a Salvadorian born artist and his interaction with immigrants in cities across the nation. Mabel has edited the feature length narratives “Counting The Days” and “My Camera” as well as several other films. She serves as co-chair of the National Association of Latino Producers (NALIP) San Francisco Chapter.

To listen to the interview, scroll down until you see “Podcast” on the right hand side, then select “HMPR Mabel Valdiviezo,” click on the play button or download it to your iPod or MP3 player to listen on the go, in your car or at home. You can also subscribe to the podcast by right clicking over the podcast box and selecting “copy shortcut” then inserting the URL address in the podcast section of your iTunes program listed under the “advanced” column. The podcast will remain listed in the October 2006 section of the podcast.

One Response to Listen to podcast with Mabel Valdiviezo, film producer, director “Soledad Is Gone Forever”