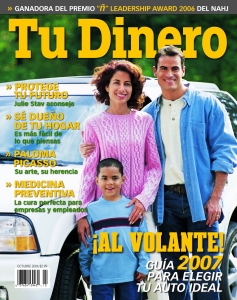 Washington, D.C.  — The National Association of Hispanic Journalists (NAHJ) will recognize 20 journalists and media outlets from a diverse range of places such as Los Angeles, Miami, El Paso, and Barcelona, Spain, at the organization’s 21 Noche de Triunfos Journalism Awards Gala on October 5, 2006 in Washington, D.C. The 2006 ñ and Journalism Awards recognize print, wire, broadcast media and one online publication.

Two media outlets received ñ Awards, NAHJ’s highest honors. Tu Dinero, a year old Spanish language magazine on financial issues, published by Editorial Televisa, received this year’s Leadership Award. The Broadcast Journalist of the Year Award was for Ernesto Schweikert, owner, and the staff of New Orleans’ KGLA Radio Tropical for their work providing the region’s Spanish-speaking community with information in the aftermath of Hurricane Katrina. The awards are designed to honor “excellent work that truly serves the Latino community and outstanding journalists.”

“The excellent and varied work Latino journalists are doing not only makes us proud, but proves that we have a valuable contribution to make in an informed, democratic society,” said Ivan Roman, executive director, NAHJ. “Latino journalists and other colleagues keep making strides in telling our stories, and their work encourages us to keep moving forward in that effort.”

The 14 Journalism Awards honor journalists for their coverage of stories like Guatemalan mudslides, the Mara Salvatrucha gang in El Salvador, hidden pesticides causing deformities in children, the abuse of Latino workers who plant U.S. forests, the scourge of land mines in Latin America, the influence of the Christian right in politics, and struggles of Mexican police on Tijuana streets controlled by drug cartels.

One Response to NAHJ to present Journalism Awards in October