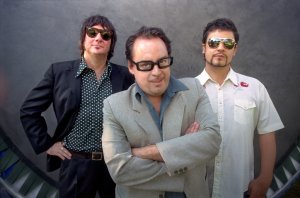 Chilean rock band Los Tres is releasing a new album, “Hagalo Usted Mismo” (Do It Yourself), on September 26, 2006. A follow up to 2001’s “Freno de Mano,” it combines melodic rock with traditional Chilean folkloric influences and instruments, and classic rock sounds.  “Camino,” the first single, is described in promotional materials as having an upbeat, vintage rockabilly sound. “Camino” broke radio records for initial airplay on its Chilean release and has been going strong on rock stations throughout Mexico.

The album, produced by Joe Blaney (The Clash, Prince, Charly Garcia) was recorded earlier this year in New York City and features the participation of drummer Steve Jordan (Bob Dylan, The Rolling Stones, Eric Clapton, Aretha Franklin); and Café Tacuba’s Emmanuel del Real, who participated as an invited musician and produced and mixed several of the songs.

The collaboration with Café Tacuba was a natural step after the success of Tacuba’s four-song EP of Los Tres covers “Vale Callampa,” which brought Los Tres back into the spotlight and introduced the trio to an international audience.  Del Real accompanied Los Tres before a crowd of 30,000 fans in Santiago, Chile and also at their performance at the Latin American equivalent of Coachella, Vive Latino in Mexico City.