Sony releases Quinceanera, movie about a Latino neighborhood in transition 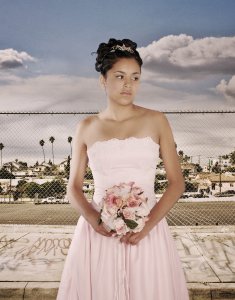 Emily Rios as Magdalena in “Quinceañera”

Sony Pictures Classics recently released “Quinceañera,” (Spanish for 15 year old girl), winner of the Audience Award and Grand Jury Prize for Best Dramatic Feature at the Sundance Film Festival 2006. According to the film’s promotional materials, the 90-minute “Quinceañera” is a look at what happens when teenage sexuality, age-old rituals, and real estate prices collide.  It is described as a “reinvention of Kitchen Sink drama, fueled by the racial, class, and sexual tensions of a Latino neighborhood in transition.”

In the movie, Magdalena (Emily Rios) is the daughter of a Mexican-American family who run a storefront church in Echo Park, Los Angeles. With her fifteenth-birthday approaching, all she can think about is her boyfriend, her Quinceañera dress, and the Hummer Limo she hopes to arrive in on her special day.

A few months before the celebration, Magdalena falls pregnant. As the elaborate preparations for her Quinceañera proceed, her religious father finds out about the pregnancy and rejects her. 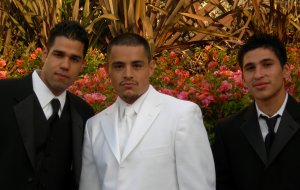 Forced out of her home, Magdalena moves in with great-great uncle Tomas (Chalo Gonzalez), a gentle man who makes his living selling champurrado (a Mexican hot drink) in the street.  Already living with him is Carlos (Jesse Garcia), Magdalena’s cousin, a tough young cholo who was thrown out by his parents for being gay.

The back house rental where Tomas has lived happily for many years is on a property that was recently purchased by an affluent white gay couple (David Ross and Jason L. Wood), pioneers of gentrification in the neighborhood. Carlos quickly attracts the couple’s attention and they soon make him their plaything in an ongoing three-way.

As Magdalena’s pregnancy grows more visible, she, Carlos, and Tomas pull together as a family of outsiders.  But the economics of the neighborhood are turning against them.  Ultimately, this precipitates a crisis that threatens their way of life.

2 Responses to Sony releases Quinceanera, movie about a Latino neighborhood in transition