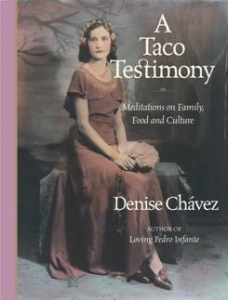 Denise Chavez who defines her roots as being from New Mexico, Texas, and México is the author of the newly released A Taco Testimony Meditation on Family, Food and Culture (Rio Nuevo Publishers). The 207-softcover book on “ruminations on a life lived among tacos” is set in the U.S.-Mexico border and written as a memoir to the author’s parents and family. Although it includes some recipes it is not a cookbook. The cover price is $16.95.

A Taco Testimony is peppered with words in Spanish and recepies. Although it has menu like section titles it is about Chavez’ memories of growing up in a Mexican American home more than it is about Mexican food.

An award-winning fiction writer, playwright, actress, and teacher, Chávez considers herself a “performance writer.” In 1995 her first novel, Face of an Angel, won the American Book Award. She authored the novel Loving Pedro Infante, as well as nonfiction, fiction for children, and more than 45 plays.

According to her biography, her writing and many community projects have been supported by the Fulbright Commission, the Lannan Foundation, and a Lila Wallace-Reader’s Digest Award. Chávez founded the Cultural Center of Mesilla and the Border Book Festival, of which she is executive director. She lives with her husband in Las Cruces, New Mexico.

Click here to buy A Taco Testimony: Meditations on Family, Food and Culture