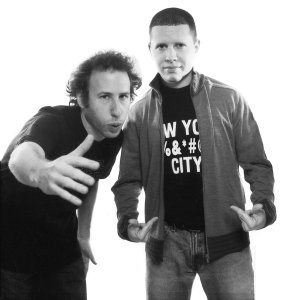 The Jewish community in the United States is relatively small. When broken into the Latino-Jewish community it’s much smaller. Then there is the mixture of the hip hop and Jewish communities. Out of a hybrid of these cultures came the Hip Hop Hoodios. The Hoodios next stop will be a free performance at this year’s Latin Alternative Music Conference (LAMC) on August 3, 2006 at El Museo Del Barrio in Spanish Harlem. The free performance is sponspored by the LAMC.

The bicoastal group led by Josh Norek of Colombian decent and Abraham Velez of Puerto Rican decent is part of a collective of Latino hip hop artists based out of New York and Los Angeles. The group mixes Latin rhythms with hip hop beats, topped with trilingual lyrics (English, Spanish and Hebrew).

The Hoodios have been garnering recognition since their 2002 debut album “Raza Hoodia.” The self-released album sold 5,000 copies. This is impressive considering it was completed in one weekend on a $500 dollar budget. For the second release, “Agua Pa’ La Gente,” there was a lot more money and time thanks to the Hoodios signing on with Jazzheads Records.  The group spent a year working on the album, produced by Happy Sanchez, which includes 12 new tracks and a money back guarantee.

Although according to the Hoodios the majority of their followers are Latinos they are also recognized by the Jewish community. They were one of the first Latin groups invited to perform at the Salute To Israel Parade in June of 2005. The annual parade down 5th Avenue in New York City included a float blasting the sounds of “Nose Jobs” and other Hoodios tracks. — Melissa Gonzalez.