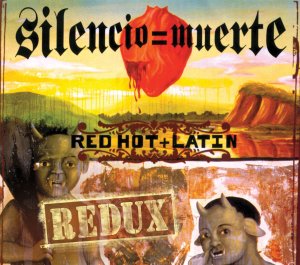 In celebration of the ten year anniversary of “Red Hot & Latin,” Nacional Records is bringing back the compilation and reissuing it as “Red Hot & Latin Redux” with five new bonus tracks from Latin alternative artists like Brazilian Girls with Kevin Johansen, Thievery Corporation, Nortec Collective, Kinky and Plastilina Mosh.

The album also features remastered tracks from the original release such as bilingual collaborations between David Byrne and Café Tacuba, Fishbone and Los Fabulosos Cadillacs, Los Lobos and Money Mark and Laurie Anderson and Aterciopelados.

Silencio=Muerte: Red Hot & Latin, originally released in 1997 on Jellybean Benitez’ H.O.L.A Recordings, was the tenth album in the Red Hot series created to fund the fight against AIDS in Latin America and the Latino community. Some thought the pairing of artists like David Byrne and Café Tacuba reflected a cultural encounter ahead of its time.

When “Red Hot & Latin” was originally released, the album was the subject of an MTV special. Profits generated by Red Hot & Latin Redux will go to the Red Hot Organization to fight AIDS in the U.S. Latino community and in Latin America. For more information online visit RedHot.org

To listen to “What’s New Pussycat,” a song by Los Fabulosos Cadillacs and Fishbone from the recently released “Red Hot & Latin Redux” album, scroll down on HispanicMPR.com until you see “Podcast” on the right hand side, then select “What’s New Pussycat” by clicking on the title or on the play button. You can also download it to your iPod or MP3 player to listen on the go, in your car or at home. To download it, click on the arrow of the recording you wish to copy and save to disk. The podcast will remain listed in the July 2006 section of the podcast.