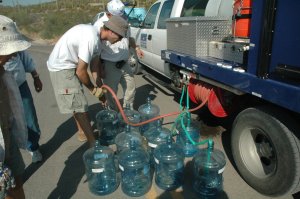 Los Angeles, California –  Victor Favela, president of Delgada y 30, plans to place $60 bottles of his weight loss product throughout the Arizona desert. Why, you may wonder. According to Favela, due to drastic measures in areas of California and Texas by the Department of Homeland Security Border Patrol and civilian militias, more than 40 percent of undocumented immigrants crossing the border in the last weeks have been forced to cross through the Sonora dessert in Arizona.

Faith motivated Humane Borders offers humanitarian assistance through more than 83 emergency water stations on and near the U.S.-Mexican border. Paisanos al Rescate, a volunteer driven nonprofit, drops water and information with parachutes along the Texas, New Mexico, Arizona and California borders with Mexico. The chutes include methods for recipients to signal the aircraft in a life threatening situation. In those cases, Paisanos al Rescate will assist in coordinating rescue efforts with the U.S. Border Patrol Search and Rescue (BORSTAR).

“More than 2,000 undocumented immigrants have died in the desert since 1998,” said Favela. “It’s sickening to see so many people die unnecessarily. There is an all natural ingredient called pepino espinoso in every capsule of my product.  It’s made from a cactus like plant discovered over 2,300 years ago by an ancient tribe of the Kalahari desert in South Africa. They’ve been using it for centuries to curb appetite and thirst while they trek across the desert.” 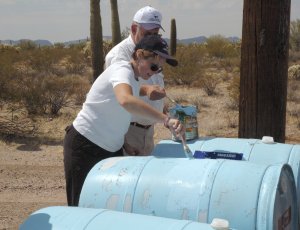 Water distribution has saved many lives. But according to volunteers, dropping drugs or other substances in the dessert could be dangerous to people and animals. Not everyone agrees that distributing weight loss products in the dessert is a good idea.

“We’ve given away over 75,000 gallons (of water) in five years and we know that people are alive today because they had water from our water stations. I would be against any kind of drug or substance that alters their perception of what their body needs,” said Sue Goodman, executive director of Humane Borders. “It’s very scary.”

The Humane Borders, a 501(c) (3) organization established in 2000 by Rev. Robin Hoover, water stations vary. Some consist of one 65-gallon barrel of water and others may have a dozen barrels, emergency rations, first aid kits and, in winter, warm clothes. Through collaboration with authorities, such as the U.S. Border Patrol and Consulate of Mexico, Humane Border representatives have a detailed map they use to determine the location of the stations on public and private lands.

Hundreds of volunteers, including 60 trained drivers, head out to the desert for 70 trips each week. They maintain the stations, refilling the water barrels, picking up discarded items and reporting vandalism. More information is available online at HumaneBorders.org and PaisanosAlRescate.org