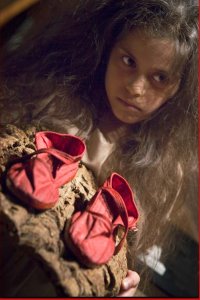 San Francisco, California – Haiku Films Producer and Director Mabel Valdiviezo will hold a benefit party, silent auction and sneak preview of the short film “Soledad Is Gone Forever” Friday, June 23 at 6 p.m. at the Cultural Center of the New College of California, 766 Valencia Street at 19th. The event is endorsed and supported by the School of Humanities of the New College of California and is sponsored by the Film Arts Foundation.

“We’re completing the shots and once it’s done we’ll be sending it to some of the festivals,” said Valdiviezo. “The goal to make the short film is to show the potential of the feature story.”

“Soledad Is Gone Forever,” a 14-minute film, is described by promoters as “a spellbinding, poetically haunting, psychological drama that explores the long-term human cost of state sponsored violence.”

Based on real accounts, the film is an intimate portrait of a young photographer, Soledad Gonzalez (Carla Ohana Sanchez), a child survivor of the Pinochet era. She witnessed the violent death of her father killed by the Chilean military twenty years ago and erased them from her memory. Through the film viewers follow Soledad’s journey filled with recurring visions and nightmares and her struggle to remain sane until she remembers her traumatic childhood.

Proceeds from the benefit will help fund the completion of the short film to be submitted to local and national film festivals. These contributions will also support the developing phase of the feature-length version of “Soledad Is Gone Forever.”

Valdiviezo, principal of Haiku Films, is a Peruvian born writer, director and producer of short films such as “The Water’s Muse” and “A Box Full Of Mirrors.” For information online, SoledadIsGoneForever.com