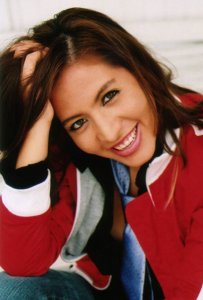 An instrumental version of Diana Mera’s song “Bésame” from the “Dianamera” album will be the theme music for future HispanicMPR.com audio recordings. SGM Records and Diana Mera, the singer and song writer of the song, provided HispanicMPR.com the music and permission to feature it in upcoming recordings. The first podcast to feature the new music was an interview on June 12 with Martin Castro, president and CEO, Mexican American Opportunity Foundation (MAOF).

Diana Mera wrote “Bésame” during the summer of 2002 in Phoenix, Arizona, where she found inspiration to write the songs of her first album. The full length of the song with lyrics, which is available at iTunes, is about four minutes (3:54). The “Bésame” music video has aired on MTV/VHUNO, Televisa, Ritmoson Latino, and Univision.

“Bésame means a lot to me and it feels amazing that it is taking me to do and be part of great projects like being the theme song of the Podcast of HispanicMpr.com,” said Diana Mera.

Mera, born in Quito, Ecuador was raised in Lima, Peru. She has lived in México, Venezuela, Switzerland and the U.S. where she now resides. Mera, who always wanted to sing, started her career on television shows such as “Despierta América” on Univisión and “De Mañanita” on Telemundo.

SGM Records, a record label and production company, conducts digital video production specializing in music videos, TV commercials and public service announcements. It manages and promotes Mera’s career.  SGM Records is a young enterprise owned and operated by Hispanic women committed to excel “in all areas of the business by working with the most competitive and dynamic professionals in each field.”