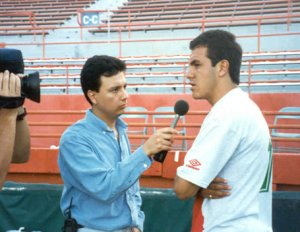 Coral Gables, Florida –  Terra.com leveraged the journalistic collaboration of Terra Networks’ regional sites to create a bilingual (English and Spanish) World Cup 2006 tournament website, Alemania 2006, focusing on the road to Berlin. Promoters describe it as “the largest, most complete site.”

“Terra Networks’ journalistic collaboration offers World Cup fans unparalleled in-depth coverage and is a prime example of the Internet’s ability to reach a mass audience,” stated Fernando Rodriguez, CEO, Terra. “The Internet is fast becoming the media of choice for avid sports fans.  Anyone with a browser and connectivity can actively partake.”

Terra.com served as the official site for the Copa Oro and offers fan clubs for Spanish teams, Barcelona and Real Madrid. Terra also features the teams and games of the Fútbol Mexicano, Copa Libertadores de America, and Copa Europa.

According to Terra executives, World Cup 2006 is set to reach an estimated 3 million spectators attending 64 matches that will be played in the German cities of Berlin, Munich, Frankfurt and Hannover. Millions are expected to follow the games on television, radio and online.