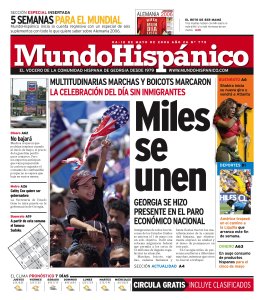 Atlanta, Georgia — MundoHispánico, billed as Atlanta’s largest circulation Spanish-language weekly and owned by The Atlanta Journal-Constitution, redesigned the newspaper to make it more attractive and easier to read. The revamped look includes a new logo and a contemporary design as well as a format meant to encourage readers to spend more time with the paper.

“The latest in a series of moves to expand and improve our publication to meet the needs of the rapidly growing market,” said Lino Dominguez, publisher, MundoHispánico.

Atlanta’s Hispanic population exceeded 500,000 in 2005 and is expected to grow by another 31.5 percent by 2010. MundoHispánico is distributed on Thursday with a circulation of 75,000, including a 7,000-copy zoned edition in suburban Hall and Clarke counties.

Three weeks prior to the redesign, MundoHispánico launched a second weekly that serves as a “how to” guide for new Hispanic residents of metro Atlanta. Pasos: Para vivir mejor (Spanish for Steps to a Better Life) is a free tabloid publication with a weekly distribution of 35,000. Pasos is published each Monday and features short stories and color photographs to illustrate the steps readers can take to accomplish their goals.