Screenings of award winning documentary on child labor in Bolivia to be held in D.C. 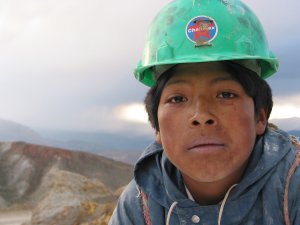 Basilio Vargas from “The Devil’s Miner”

Washington, D.C.  –  The Independent Television Service (ITVS), Maryland Public Television (MPT), WHUT, and the Social Action and Leadership School for Activists (SALSA) will co-present two special screenings of “The Devil’s Miner” in Washington D.C. in May. The screenings are free and open to the public.

The film is an award-winning documentary in Spanish with English subtitles about two brothers who work in the Cerro Rico mines of Bolivia. Living in poverty with their mother in the mountains of Bolivia, 14-year-old Basilio and his 12-year-old brother, Bernardino, work long shifts in the silver mines, braving deadly conditions to earn enough money to attend school.

The first screening is at the American Film Institute Silver Theatre at 11 a.m. Saturday, May 6, 2006. The second screening is at Busboys and Poets at 5 p.m. Sunday, May 21, 2006. Both screenings will be followed by a discussion with Oscar Ordenes, a Bolivian native and promoter of Latin American humanities in D.C., and Kevin Healy, adjunct assistant professor, International Affairs, The Elliott School.

3 Responses to Screenings of award winning documentary on child labor in Bolivia to be held in D.C.