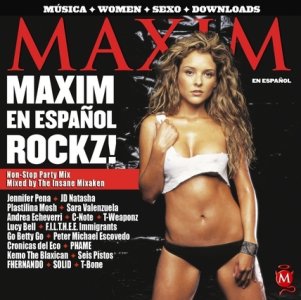 “Maxim en Español Rockz!” is enhanced with two music videos, “La Receta” by Kemo the Blaxican and “Amortiguador” by Andrea Echeverri, screensavers and wallpapers  for download. On the pop side, Jennifer Pena makes an appearance with the song “Corazon Bandido.” Rock and punk are represented by buzz bands as Go Betty Go (“Saturday”), Lucybell (“Salvame La Vida”) and Seis Pistos (“El Punk No Morira”).  Hip-Hop and urbano abound with acts such as Kemo the Blaxican of Delinquent Habits (“La Receta”), Phame (“Arriba”), and T-Weaponz (“Mira, Mira”).

Backed with an upcoming national television and print campaign, “Maxim en Espanol Rockz!” represents one of the most extensive efforts to date to represent a cross-section of Hispanic youth culture in Spanish and English on one single album.

Dennis Publishing, Inc. is a media company that publishes the two modern men’s lifestyle magazines in America,  Maxim (2.5 million rate base) and Stuff (1.3 million rate base). The company also publishes general interest music magazine Blender (Advertising Age’s Launch of the Year and Adweek’s Hot List), and The Week, a distillation of the week’s most important news and opinion from the U.S. and international media (Advertising Age’s A-List).  Maxim Radio is broadcast on Sirius Satellite Radio on channel 108. JMuzic , based in Pasadena, California, is an independent record label that specializes in signing and developing Latino talent for the U.S. bilingual market.

To listen to “Ghetto Mambo” by Peter Michael Escovedo from the “Maxim en Español Rockz!” soundtrack, scroll down on HispanicMPR.com until you see “Podcast” on the right hand side, then select “Ghetto Mambo,” hit the play button or download it to your iPod or MP3 player to listen on the go, in your car or at home. To download it, click on the arrow of the recording you wish to copy and save to disk. The podcast will remain listed in the April 2006 section of the podcast.