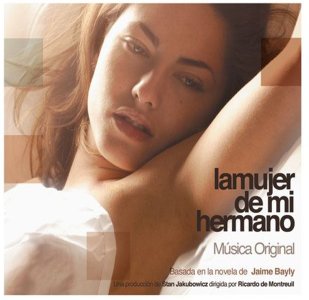 The soundtrack to one of Latin America’s most popular films last year, “La Mujer de Mi Hermano,” is set for release on Nacional Records on April 11 in conjunction with the U.S. release of the film by Lionsgate on April 14. The film and soundtrack follow the success of other influential films and soundtracks that have defined a new wave of Latin American cinema such as “Amores Perros” and “Y Tú Mama También.”

“La Mujer de Mi Hermano,” has been a box office heavyweight in Mexico and Latin America. The soundtrack features some of the latest tastemakers in Latin alternative and electronica such as Aterciopelados frontwoman Andrea Echeverri, electronic darlings Nortec Collective, Sara Valenzuela, Mexican Institute of Sound, The Pinker Tones and NYC-based up-and-comers Pacha.

Highlights of the album include Tanghetto’s new “electro tango” version of the seminal New Order favorite “Blue Monday” (available on the HispanicMPR.com podcast) and a re-working of the classic La Ley track “Mentira” by Beto Cuevas, the vocalist from multi-Grammy-winning Latin rockers La Ley (who appears in the film as a Catholic priest).  The soundtrack also features original music composed by Angelo Milli.

The film, based on the novel of the same title by Jaime Bayly, features a cast led by telenovela (soap opera) stars Barbara Mori, Christian Meier and Manolo Cardona, and is directed by Ricardo de Montreuil.   After almost ten years of marriage, the stunningly attractive Zoë (Barbara Mori) realizes that her marriage to Ignacio (Christian Meier) no longer carries the passion and spark it once had.  Emotionally adrift, she searches for those sensations once again; she soon finds herself seduced into the arms of Gonzalo (Manolo Cardona), her husband’s brother.  At first, Zoë becomes reinvigorated by the romance, but her decision soon launches a series of events that drives these three people through a gauntlet of revenge, secrecy and despair that will unravel them all.  “La Mujer de Mi Hermano” is a Stan Jakubowicz production directed by Ricardo De Montreuil.

To listen to Tanghetto’s “Blue Monday” single from the soon-to-be released “La Mujer de mi Hermano” soundtrack, scroll down on HispanicMPR.com until you see “Podcast” on the right hand side, then select “Tanghetto Blue Monday,”  hit the play button or download it to your iPod or MP3 player to listen on the go, in your car or at home. To download it, click on the arrow of the recording you wish to copy and save to disk. The podcast will remain listed in the April 2006 section of the podcast.