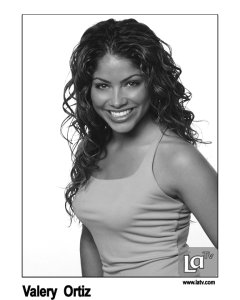 Puerto Rican-born actress Valery Ortiz joined LATV as the host of “LATV Does Hollywood.”  Ortiz is currently generating a buzz with her transition to the big screen in the new 20th Century Fox release, “Date Movie.”  In the romantic comedy, she stars as Jell-O, a spoof on fellow Latina actress, J-Lo.  Ortiz also stars as Madison Duarte on the original half-hour teen drama “South of Nowhere,” which is entering its second season on The N, the nighttime network for teens.  The N, a programming arm of MTV Networks is available in 43 million households via cable, digital cable and satellite television.

Other LATV hosts and VJ’s are also making waves on the stage, on television, and as professors.  LATV producer/host Giovanni Blanco leads a double life as frontman for popular bilingual funk-dance-rock act Spigga.  Patricia Lopez, the host of LATV’s “M2M Live” and “Movimiento con Patricia Lopez”, is a frequent Entertainment Host on “KTLA the WB Morning News.”  “LATV Late Night” host Alysha Del Valle is also a traffic reporter for ABC 7 News and a special-events host for LA’s 102.7 KIIS FM.  And “Rokamole” host Josh Kun is an associate professor of English at UC Riverside. More information on LATV programming is available at LATV.com