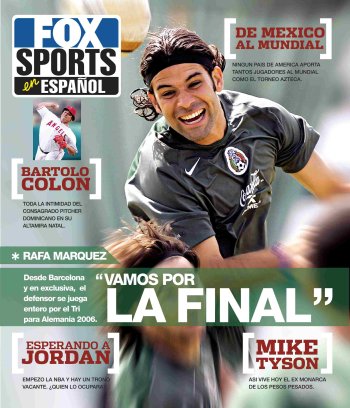 “I can’t think of a better way to kick off our countdown to our 10th anniversary in November than with the launch of what we hope will become the preeminent sports magazine among Latinos,” said David Sternberg, executive vice president and general manager of Fox Sports en Español.  “We have a great partner in Cuatro Media and are confident that their expertise in publishing and sales, combined with Fox Sports en Español’s brand equity and unrivaled passionate fan base, uniquely positions us for great success.”

While the exact terms of the deal were not revealed, with a robust starting circulation of 750,000, the Fox Sports en Español magazine will initially be available through distribution agreements with leading Spanish-language newspapers in the top Hispanic DMAs including Los Angeles, New York and Chicago (Tribune’s Hoy Newspaper); Houston (Houston Chronicle’s La Voz and La Vibra); Dallas (Dallas Morning News’ Al Dia); Fort Worth (Knight Ridder’s La Estrella); and Miami (Knight Ridder’s El Nuevo Herald).  The magazine will also be available through subscription on a nationwide basis. Cuatro Media expects to lock in additional distribution agreements over the next few months to augment the publication’s circulation to over one million.

Advertising sales responsibilities for the new venture will be led by Cuatro Media’s Director of Sales Jeffrey Duque in close cooperation with Publicitas-LHM and Fox Sports en Español’s advertising sales team led by senior vice president of Advertising Sales Tom Maney.  Exectuvites hope Fox Sports en Español magazine benefits from the strength and success the Fox Sports en Español brand has enjoyed among consumers and advertisers as a widely distributed and watched Spanish-language sports cable network over the past ten years, in the United States and Latin America.  The Fox Sports en Español magazine will cater to Latinos’ deep-rooted culture, heritage and passion for sports by offering quality sports content available for and by Hispanics.  Among its many points of differentiation, the magazine’s editorial staff, led by editor in chief Luis Viñuales of Cuatro Media, is made up of Latino writers, columnists and opinion leaders that have grown up playing, watching, and/or reporting on sports throughout the U.S., Spain and Latin America.

“Among Hispanics, sports are a deep rooted passion. We created a magazine that respects our readers and takes this passion very seriously. We are particularly excited about launching in this very special year when the soccer and baseball world cups coincidem,” said Viñuales. 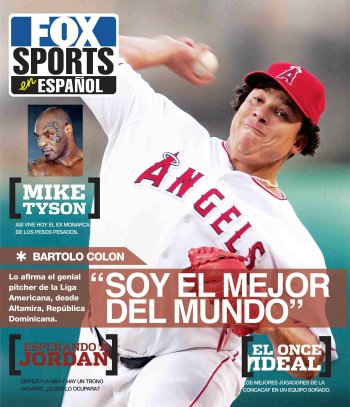 Departing from the monolithic model followed by other magazine ventures targeting Latino sports fans, Fox Pan American Sports and Cuatro Media embarked on months of extensive consumer and market research and based on those findings decided on the creation of two distinct editions of the magazine, which will be published simultaneously, as the most effective content model for meeting the diverse interests of today’s Latino sports enthusiast.  One version will have a Caribbean Hispanic feel and reflect the distinct preferences and sports profiles of Caribbean Hispanics such as baseball. The other version will be more heavily targeted to the passionate soccer fan. Although features will vary between versions, both editions plan to cover a representative cross-section of sports including soccer, baseball, boxing, tennis, basketball, football, and motor sports.

Starting out in six of the top 10 Hispanic DMAs, which were selected based on their large Hispanic populations and high concentration of Hispanic advertising agencies, the Fox Sports en Español magazine is poised to become a preeminent Spanish-language sports magazine and deliver to advertisers the strongest male composition in the competitive category.  Later in 2006, as part of the agreement, Fox Pan American Sports and Cuatro Media will introduce a second title targeting sports enthusiasts across the Spanish-speaking Americas. Fox Pan American Sports LLC is an international sports programming and production entity jointly owned by Hicks, Muse, Tate & Furst and News Corporation’s (NYSE: NWS) Fox Sports International.

Fox Sports en Español features more than 1,500 hours of live, exclusive sports programming in Spanish and, with few exceptions, English SAP each year, including the Copa Toyota Libertadores, Copa Nissan Sudamericana and InterLiga soccer tournaments; the Major League Baseball playoffs, All-Star Game and World Series; and Championship boxing from Mexico and the U.S. The channel reaches more than 7 million cable and satellite households in the U.S.

Principally owned by Savoy Capital, a Houston-based private investment firm, Cuatro Media, Inc. (Cuatro Media) was founded in 2003 and is a leading international developer, producer and distributor of content for Hispanic audiences worldwide.  Headquartered in New York with regional offices in Spain and Argentina, Cuatro Media has built one of the largest and most diverse networks of Spanish-language media properties and is now capable of reaching an audience of more than seven million in 16 countries.  In addition to representing the Fox Sports en Español brand, Cuatro Media also produces and sells content through licensing agreements with Sesame Street, MTV, and Discovery Channel, among others.  Cuatro Media is currently exploring other viable platforms for content distribution, including television and digital platforms such as web-based technologies, blogs and pod-casts.  For more information, visit Cuatro Media