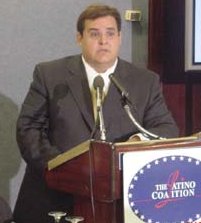 Robert Deposada, president of the The Latino Coalition

"This survey has become the most reliable and accurate study on Hispanic political and consumer behavior in the U.S. The 2004 National Latino Survey was dead-on accurate in predicting the Latino vote in the 2004 elections," said TLC President Robert Deposada. "We predicted the nine-point spread between Senator Kerry and President Bush, while all other surveys predicted a Kerry win of over 30 points. The results of this year’s survey offer similar surprising results and highlight the future trends of Latino adults and Latino voters in the U.S. However, contrary to past years these trends spell trouble for the Republican Party."

"This survey shows there are two very different segments within the Hispanic community: recent immigrants and those who have been here for years," Deposada added. "Those who have been here longer tend to mostly speak English, are registered voters, are in better financial status, and tend to be more focused on issues that affect their pocket books like taxes, education and health care. The more recent immigrants tend to have lower incomes, speak mostly Spanish only and are more concerned over immigration policies and language barriers. Their views on political issues are many times at odds. Politicians from both political parties need to understand these differences and the diversity within the Latino community if they want to successfully reach out to these voters and future voters."

The national Hispanic survey was conducted among 1,000 Hispanic adults by Latino Opinions between December 10-13, 2005. All interviews were conducted by professional English and Spanish speaking interviewers via telephone. Respondents were given the option of conducting the survey in English or Spanish. Interview selection was at random within predetermined population units. These units were structured to statistically correlate with the nation’s adult Hispanic population according to the 2004 U.S. Census estimates. The accuracy of this national survey of 1,000 Hispanic adults is within plus or minut 3.1 percent at a 95 percent confidence interval.

"Hispanic registered voters are strongly supporting initiatives to reform immigration while penalizing illegal behavior. A majority of Hispanic voters (52.4 percent) support initiatives that would not allow people who entered this county illegally to become citizens unless they reapply from their country of origin," Deposada said. "By a margin of 50 percent to 41 percent, Hispanic voters support increasing the number of border patrol agents in our southern border, and also support new laws to make sure that employers can only hire workers who are in the U.S. legally (50 percent to 41 percent). An overwhelming majority of 82 percent support the creation of a new Temporary Worker Program. Also a plurality (41.2 percent to 39.9 percent) support imposing a fine of at least $2,000 for illegal immigrants in order to gain legal employment as a temporary worker in the U.S."

"Meanwhile, non-registered Latinos have completely different views on these issues," Deposada added. "They overwhelmingly oppose laws to make sure that employers can only hire legal immigrants (65 percent to 28 percent); oppose increasing the number of border patrol agents along our southern border (61 percent to 29 percent); and they support allowing illegal immigrants to have access to citizenship (50 percent to 40 percent)."

"While there has been enormous progress for the Republican Party under President George W. Bush, there is real danger for a repeat of the Pete Wilson era that alienated Hispanics from the GOP for years," Deposada added. "If the Republican leadership in Congress allows an extremist group to control the debate over immigration reform and put partisan rhetoric over real commonsense legislation, the GOP will eliminate all the progress achieved by President Bush in attracting Hispanics into the GOP."

"The Republican leadership in Congress has failed miserably in keeping the coattails of President Bush among Hispanic voters," Deposada said. "When compared to last year’s number on the question of who does a better job at handling key issues, Democrats in Congress kept the same level of support John Kerry had and improved on it, while Republicans cut the numbers in half compared to President Bush."

Following are some survey questions and the corresponding response percentages:

"Representing your views on immigration"

"Being in touch with the Hispanic community"

"The Republican Party is rapidly losing all the gains they achieved under President Bush in the Hispanic community," Deposada added. "If the GOP wants to remain competitive among Hispanic voters, they need to wage an all out effort to regain the momentum."

The Latino Coalition is a non-profit, non-partisan organization based in Washington, D.C. established to address policy issues that directly affect the well-being of Hispanics in the United States. Its mission is to develop and promote policies that will foster economic equivalency and enhance overall business, economic, and social development of Hispanics. For more detailed information on the survey and to review past surveys, visit The Latino Coalition