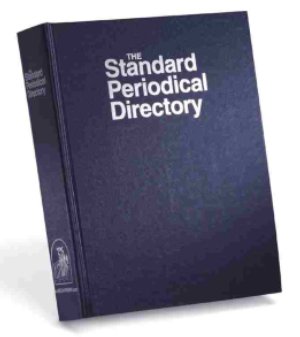 New York, New York – Hispanic publications led in growth over the last 10 years, up from 124 titles in 1996 to 329 titles in 2006, according to the publishers of the newest edition of The Standard Periodical Directory released recently (a review copy of the directory was unavailable). Published by Oxbridge® Communications, Inc., The Standard Periodical Directory is one of the largest directories of U.S. and Canadian periodicals, with information on 55,809 magazines, journals, newspapers, newsletters, directories, and yearbooks in its latest edition.

The Directory is priced at $1,595 for the print edition; $1,695 for the Single-User CD and $2,995 for print directory and CD. It is also available online as part of the MediaFinder® database service for $1,295 for a single user, and $2,090, for a site license annual subscription.

"We see tremendous growth in Hispanic periodicals, with an increasing number of regional publications, such as Tu Ciudad Los Angeles and Ser Magazine (Laredo, Texas), as well as an increase in national publications such as Siempre Mujer. Meanwhile, general interest, men’s, and women’s publications have declined," stated Deborah Striplin, editorial director of The Standard Periodical Directory.

The categories with the largest number of publications for 2006 are medicine, law, religion, ethnic, computers, education, business, health and fitness, regional interest, and travel.  The use of the Internet in publishing continues to grow with more than 24 percent of the publications offering online or e-mail editions to supplement the print editions. There are also 238 digital, or virtual, publications, a new electronic format. A total of 3,665 publications are available in electronic format only. "The Standard Periodical Directory is a great tool for librarians, advertisers, marketers, printers and publishers to research information on more than 55,000 U.S. and Canadian periodicals,"  said Striplin.

The Directory includes the publication’s name, phone number, fax, email, URL, editorial description, personnel, ISSN, year founded, frequency, circulation, subscription and advertising rates, list rental and production data, and target audience. Oxbridge Communications, founded in 1964, has one of the largest databases of U.S. and Canadian print media and catalogs. In addition to The Standard Periodical Directory, Oxbridge has a number of reference products including the MediaFinder CD-ROM, National Directory of Magazines; Oxbridge Directory of Newsletters; National Directory of Catalogs, and MediaFinder.com an online database of more than 70,000 publications, including catalogs. Details at Oxbridge Communications