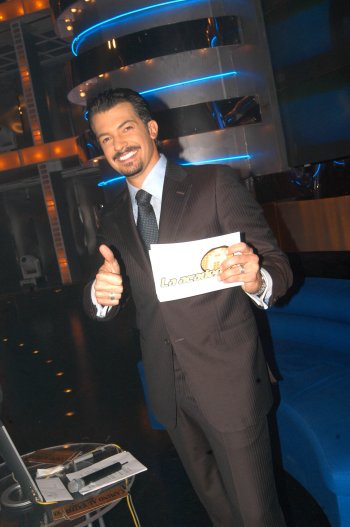 Mexico City, Mexico – Concert 9 of La Academia USA was an evening of surprises. Catalina, from Miami, exited the show; Frankie, Nohelia and Iván made important gains; and Gustavo, decided to stay.  Following a week where Gustavo appeared to change his mind daily on whether to stay or leave the program, and an interpretation of “Baila Morena,” La Academia USA host Fernando del Solar presented an ultimatum, “Do you want to leave La Academia?”

The public was divided between those that chanted for him to stay and others that chanted that he should go.  After Gustavo’s parents, wife and children appeared on stage and spoke with La Academia USA Director Beto Castillo,  his son decided to stay; kissed his wife and kids and went back to work.

With an opening medley dedicated to the Mexican pop group Maná, the students performed “Como te Deseo,” “Vivir Sin Aire,” “Perdido en un Barco” and “Oye mi Amor.”  The first student solo was Yoshigei’s, “Bidi Bidi, Bombo.”  It was well liked by the audience. Next was Jazmín, from Salt Lake City, with “Que le Den Candela.” Although the rendition brought the public to its feet, not all were enthralled by the performance.

Frankie, from Dubuque, Iowa, surprised many with his interpretation of “Corazón Partío.”  Then Miami resident Nohelia, who received a large bouquet of roses sent by Honduran President-Elect José Manuel Zelaya and delivered by the Honduran Consul in Mexico, Miguel Lardizabal, gave a masterful performance of  “Te Quedó Grande la Yegua.”

Also showing important advances were Adán, with “Sirena,” Iván with “Te Amo,” Afid, with “Salomé,” and Diana, with “Cómo Hemos Cambiado.” Heloisa, the performer from Seattle, gave a spirited performance of “I Love Rock and Roll.”  The last act of the evening was Mariana, from El Paso, with “Ay Amor.” Although the number ended with a passionate kiss with her soul mate Iván, the critics expected more on the musical side.

Finally, with the votes tallied, it was Catalina, from Miami, who exited this ninth concert in a tearful moment following a tepid performance of “Ven Conmigo.” Catalina gave one last kiss to her beau, Adán, from Chicago, before bidding the audience farewell. For more information on the program, visit La Academia USA