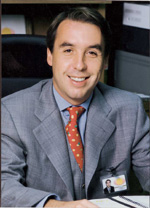 Las Vegas, NV- Intel Corporation and Grupo Televisa, S.A. (NYSE:TV), one of the largest media companies in the Spanish-speaking world, will joint efforts to provide consumers, for the first time, with a wide choice of on-demand, Internet-delivered Televisa content through Intel(R) Viiv(TM) technology-based PCs. They will provide digital programming that can be viewed and shared in the home on an Intel-based computer and variety of viewing screens and other consumer electronic devices.

The companies expect to work together to enable and verify Televisa’s wide range of popular content for compatibility on the Intel Viiv technology platform. Televisa hopes to make its digital entertainment services available over the Internet from leading manufacturers later in the first quarter of this year.

Intel Viiv technology is designed to make it easy for people to download, view, manage and share digital entertainment on a wide variety of viewing screens and networked devices such as portable media players, digital TVs and routers. As part of the proposed collaboration, Televisa plans to offer a wide range of content for Intel Viiv technology-based PCs, including its soap opera, movies, sports, news and late night shows, as well as music from Televisa’s recently launched Tarabu digital music service, plus future services.

"Today, Televisa programming and content are enjoyed by more than 425 million Hispanic consumers in the Americas and Europe, and with this exciting new collaboration with Intel our distribution reach will grow significantly," said Emilio Azcarraga, Televisa president and chief executive officer. "Making Televisa content compatible with Intel Viiv technology-based PCs will ease the delivery of our programming and services with an enhanced user experience to any customer in the world who has a broadband Internet connection."

"Intel’s collaboration with Televisa is a big step toward enabling global broadband access to a rich universe of digital content from the world’s leading media and entertainment companies," said Kevin Corbett, vice president of Intel’s Digital Home Group and general manager of the Content Services Group. "Together we will deliver exciting new on-demand viewing opportunities on Intel Viiv technology-based platforms to Televisa viewers across the world."

Intel, a world leader in silicon innovation, develops technologies, products, and initiatives to continually advance how people work and live. Intel and Intel Viiv are trademarks or registered trademarks of Intel Corporation or its subsidiaries in the United States and other countries. Additional information is available at Intel.

Grupo Televisa, S.A. is one of the largest media companies in the Spanish-speaking world, and a major participant in the international entertainment business. It has interests in television production and broadcasting, production of pay television networks, international distribution of television programming, direct-to-home satellite services, publishing and publishing distribution, cable television, radio production and broadcasting, professional sports and live entertainment, feature film production and distribution, and the operation of a horizontal internet portal. Grupo Televisa also owns an unconsolidated equity stake in Univision, a leading Spanish-language media company in the United States.