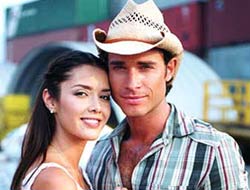 Miami, FL — Univision Network’s hit novela “Contra Viento y Marea” (Against All Odds) won the 8 to 9 pm time period among the coveted Adult 18-34 demographic, among all U.S. audiences during its first week of measurement by Nielsen’s national television ratings service, the Nielsen Television Index (NTI).  Univision Communications Inc. (NYSE: UVN) is a leading U.S. Spanish-language media company. The network’s 9 to 10 pm primetime novela, “Alborada” (The Dawn), ranked third overall in its time period, among Adults 18-34. During the same week, Univision ranked as the fifth most watched television network in the country in primetime among Adults 18-49, closely following FOX.

“We are thrilled with our first week’s performance,” said Alina Falcón, executive vice president and operating manager for the Univision Network. “Our prime time programming continues to deliver record audiences and the results underscore the fact that Univision is a true contender in the ratings race alongside the English language networks by offering its viewers culturally relevant programs they prefer.”

Nielsen Media Research’s National Television Index (NTI) started including the Univision Network as of December 26, 2005 making it the first Spanish language network to join NTI. Univision Communications Inc. is a premier Spanish-language media company in the United States. Its operations include Univision Network, one of the most-watched Spanish-language broadcast television networks in the U.S. reaching as much as 98 percent of U.S. Hispanic Households according to Univision. For more information, visit Univision