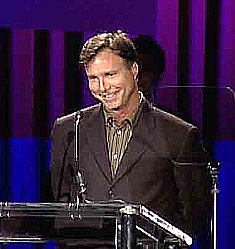 Los Angeles, CA – In the first month of its existence, LATV On Demand has become one of the Top 10 most popular video on demand programs on Time Warner Cable in Los Angeles. The bilingual youth network’s new on-demand program received tens of thousands of hits in November, far exceeding initial expectations of the network and Time Warner Cable.

“Time Warner’s VOD is a great alternative to Tivo and DVRs, and provides LATV viewers with the freedom to watch programs on their schedule,” said Danny Crowe, LATV president.  “We look forward to expanding this nationally with Time Warner Cable.”

LATV On Demand  allows Time Warner customers free, unlimited access to many of LATV’s most popular programs, at the touch of a button.  With its mix of English and Spanish-language music and lifestyle programming, LATV solidified itself as a leading network among bicultural Latinos in Los Angeles, America’s top Hispanic market.  LATV’s content is predominantly in English, targeting bilingual Latino youth.

Using Time Warner Cable’s on demand technology, viewers can watch all or part of LATV’s programming at their convenience, using a remote control to pause, fast-forward and rewind. Some of the LATV shows available as part of LATV On Demand are “Mex 2 The Max,” “LATV Live,” “LATV Shadows,” “Request at LATV” and “LATV Late Night.” LATV On Demand is available to all Time Warner Digital Cable customers in Los Angeles and Orange Counties on Channel 1096.