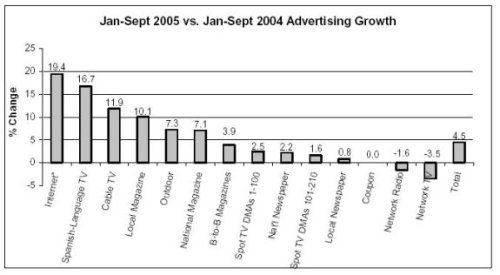 According to Nielsen Monitor-Plus, although network TV and network radio ad revenues are not growing, most media advertising spending increased in the first nine months of 2005. Advertising across the 14 media tracked by Monitor-Plus increased 4.5 percent. The Internet showed the highest percet growth with an increase of 19.4 percent. Spanish-language TV showed the second highest growth,16.7 percent.

Nielsen Monitor-Plus is provided by Nielsen Media Research, a leader of innovative advertising information services in the United States, providing advertising activity for 16 media including television tracking in all 210 Designated Market Areas (DMAs).  Nielsen Media Research is a leading provider of television audience measurement and advertising information services. In the United States, Nielsen’s National People Meter service provides audience estimates for all national program sources, including broadcast networks, cable networks, Spanish language networks, and national syndicators. Local ratings estimates are produced for television stations, regional cable networks, MSOs, cable interconnects, and Spanish language stations in each of the 210 television markets in the U.S., including electronic metered service in 56 markets. Nielsen Media Research is part of VNU Media Measurement & Information, a global leader in information services for the media and entertainment industries. VNU is active in more than 100 countries, with headquarters in Haarlem, the Netherlands and New York, USA. VNU is listed on the Euronext Amsterdam (ASE: VNU) stock exchange. For more information, please visit the VNU website at www.vnu.com.