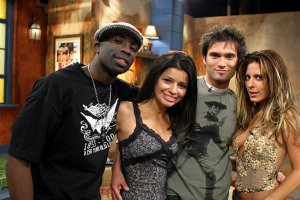 Los Angeles (November 28, 2005) – Sí TV, a U.S. English-language Latino network, initiated international program syndication efforts with the distribution of its steamy talk show, “The Rub,” to more than 20 countries in Latin America via a distribution agreement with Sony Entertainment Television (SET) Latin America. The innovative talk show that tackles sensitive issues about sex and relationships began airing on November 12th in prime time on Sony at 9 p.m. in Argentina and at 8 p.m. in other major markets.

“The Rub,” hosted by Diego Varas, Kristina Guerrero, Kerri Kasem, and Sam Sarpong features candid talk about anything and everything related to sex, love, and relationships. Seasons one and two of “The Rub,” a total of 40 episodes, will be subtitled in Spanish and Portuguese and broadcast in more than 20 countries including Mexico, Central America, South America and the Caribbean Basin (excluding Puerto Rico and the U.S. Virgin Islands).

“We are very excited about premiering our first international series on Latin America’s leading pan-regional network,” said Leo Perez, Sí TV’s chief operating officer. “The Rub was our number one show in VOD testing this year and we’re confident that Latin American viewers, like their American counterparts, will enthusiastically embrace ‘The Rub.’”

“The viewers of Sony Entertainment Television Latin America have come to expect the best and most innovative U.S. programming,” said Jesus Torres, Sony’s Vice President and General Manager.  “The Rub has a unique programming edge with the universal appeal that will enhance our leadership position in the market.”

2 Responses to Sí TV Launches International Syndication of “The Rub”