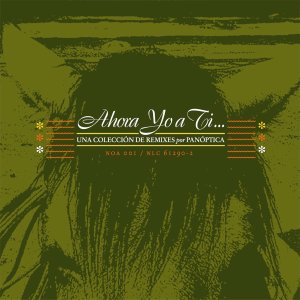 "Ahora Yo a Ti” album cover

Having already sold hundreds of thousands of albums worldwide as a founding member of Nortec Collective, Roberto Mendoza a.k.a. Panoptica steps forward with a new solo effort after various releases on European indie labels.  “Ahora Yo a Ti” (Nacional Records – Nov. 15th) is a collection of remixes Panoptica has done for several members of Nortec Collective, as well as Calexico, Her Space Holiday, David J (Love & Rockets, Bauhaus), and Latinsizer.  Panoptica creates and performs a style of music called Nortec, a fusion of Norteno and Techno, describing the collision between the style and the culture of Electronic music and traditional Mexican music.  Panoptica also delves into minimalist techno and dub influences on the new album.

The movie “Traffic” was shot in Roberto Mendoza’s hometown of Tijuana, Mexico. Even so, the violence of the international drug smuggling trade isn’t immediately apparent in the soothing melodic electronica he puts out under the guise of Panoptica. Instead, the antithesis of its dictionary definition, as Panoptica, Roberto takes things from outside and incorporates them back into his music. The result is a hybrid of European-influenced electronica and techno fused with Mexican "urban blues," the sounds he’s heard since childhood.  The two cities of Tijuana and San Diego merge into one.  Each day, hordes of American marines and underage kids cross into Mexico to party on tequila. Even the radio antennas for San Diego transmit from here. In his childhood, Mendoza was raised as much on a diet of New Wave as the local sound of Nortena and Banda.

In 1989 when he formed Artefakto with a couple of school friends, they were one of the first techno industrial bands in Mexico. Artefakto caused a big buzz in Mexico. In 1991, their first album reached number three in the charts, they came in first in many radio station polls, and in 1994 the German label Zoth Ommog put out their album ‘Des-construccion’.  Ten years later, Artefakto had changed their musical direction and name to Fussible.  Mendoza decided it was time to go it alone: "The other guys didn’t like German minimal techno as much as me," he said. So he left to become more experimental and bring a local Mexican flavor to his music.

Panoptica doesn’t stand alone. He’s one of the main movers and shakers of the Nortec Collective, which comprises five musicians (including his longtime collaborators Fussible and Bostich), several graphic artists, and one fashion designer. Together they’ve created a scene which is popular in the Tijuana underground clubs.  With support from the likes of the late John Peel (who had Panoptica on his influential BBC program back in 2001), Panoptica is reaching out to the rest of the world.

"People will say, ok, I’ve heard this sort of music before, but if they listen deep into it, there’s something unique going on which isn’t in European music,” said Mendoza.   “It’s what makes the Mexican music scene different."