First Annual World Salsa Championship to be Held in ‘Vegas 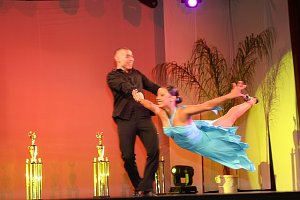 New York, NY–(Hispanic PR Wire)–October 12, 2005–Thousands of salsa dancers from more than100 nations will meet for the "1st Annual World Salsa Championships" in Las Vegas from December 14th-17th, a event to be broadcast in multiple languages and on several international TV stations including ESPN International and ESPN Deportes.

The four-day event will bring together dance partners and groups who have received awards at previous competitions held around the world. This event will take place in the Orleans Arena, a Las Vegas’ performance venue with seating for over 9,000 spectators.

During this international competition, salsa dancers will put their artistic abilities to the test in various categories: group and individual (New York and LA style), and groups/cabaret. Prizes of up to approximately $20,000 will be awarded in each category.

“Everyone has witnessed the rebirth of ballroom dancing on British and Spanish international Reality TV shows as well as in the United States with programs like ‘Dancing with the Stars’ and, more recently, ‘So You Think You Can Dance’, which broke ratings records. The main difference between these types of Reality TV shows and the "1st Annual World Salsa Championships" is that these are professional dancers. What’s more, our event is on a global scale, not a regional one, and [through it] we want to show the world who the greatest salsa dancers on the planet are,” explained Albert Torres, promoter of the WSC and over twenty Salsa Congresses worldwide..

Event producers have put together “all inclusive” travel packages starting at $349 including hotel accommodations at the Orleans Hotel and tickets for all competition nights with live music on the Arena dance floor. Aditional information is available at http://www.worldsalsachampionships.com