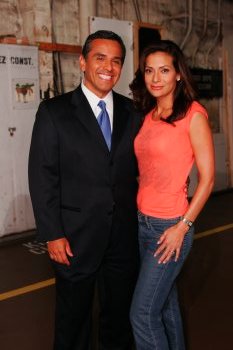 Los Angeles Mayor Antonio Villaraigosa pays a personal visit to the Lopez family for the episode "George’s Dog Days of Bummer." According to the plot, the mayor decides to visit the show when he hears that George has been imitating him in order to bully a menacing biker (guest starring Bounty Hunter Duane ‘Dog’ Chapman) into releasing a stray dog that his depressed mom has grown to love, on “George Lopez,” Wednesday, October 5 from 8:30 to 9 p.m., ET), on ABC. “George Lopez” stars George Lopez as George, Constance Marie as Angie, Valente Rodriguez as Ernie, Masiela Lusha as Carmen, Luis Armand Garcia as Max, Belita Moreno as Benny and Emiliano Díez as Vic Palmero.

Los Angeles Mayor Antonio Villaraigosa will make a guest appearance as himself, Jack Blessing will be Jack Powers and bounty hunter Duane ‘Dog’ Chapman. “George’s Dog Days of Bummer” was written by Paul A. Kaplan and Mark Torgove and directed by Joe Regalbuto.“George Lopez” is broadcast in 720 Progressive (720P), ABC’s HDTV format, with 5.1-channel surround sound and Spanish audio via SAP.