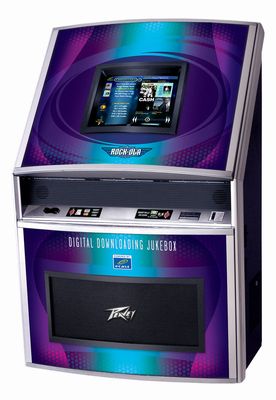 San Francisco, CA — (Market Wire) — 09/07/2005 — Ecast, Inc., a leading provider of digital-downloading, broadband-enabled jukeboxez secured license deals with music label Univision. This deal, which includes the Fonovisa catalog, will build Ecast’s collective catalog to more than 70 percent of all Latin music available for sale in the U.S.  Musical artists such as Shakira, Luis Fonsi, Tony Touch, and classic hits from Vincente Fernandez and others from EMI Latin, Warner Latina, BMG Latin, and Universal Latino are now accessible through the Ecast network. These new offerings are also expected to be a welcome development for operators who want to meet the increasing demand for Latin music in their locations and solicit new accounts in Spanish-speaking markets.

"Ecast jukeboxes provide an excellent way for us to reach new listeners," said Oliver Buckwell, a digital marketing executive with EMI Latin. Buckwell also says jukeboxes with Latin music could also potentially go beyond just reaching new audiences. "Since we’ll have the ability to track the number of plays our artists receive, it will be easy for us to determine if jukebox sales stimulate record sales," he said. "We are also interested in the unmatched ability to promote tours and various marketing initiatives for our Latin artists through a jukebox, things that could never be done in that genre before now."

Jukebox operator Rick Caviglia of California Amusement Group stated, "My top Latin locations have been asking for downloading jukes and now that Ecast has the catalog, we have the right product to put on the street. This will definitely help me expand my business."

In conjunction with the catalog expansion, Ecast added a Spanish language user-interface to make the software more accessible to the Spanish-speaking market. Ecast also modified the interface to display weekly new additions in Spanish so patrons can easily find and order the tracks with one touch. These new features and the expanded catalog will be showcased by Ecast at the upcoming Amusement and Music Operator Association’s (AMOA) International Expo at Las Vegas in September.

Ecast delivers music to consumers in bars and restaurants through a network of over 4,200 broadband-enabled digital jukeboxes. All Ecast-powered jukeboxes allow patrons to choose among a substantial catalog of song selections from the major record labels and many popular independent labels. Ecast (http://www.ecastinc.com ) is privately owned with offices in San Francisco.