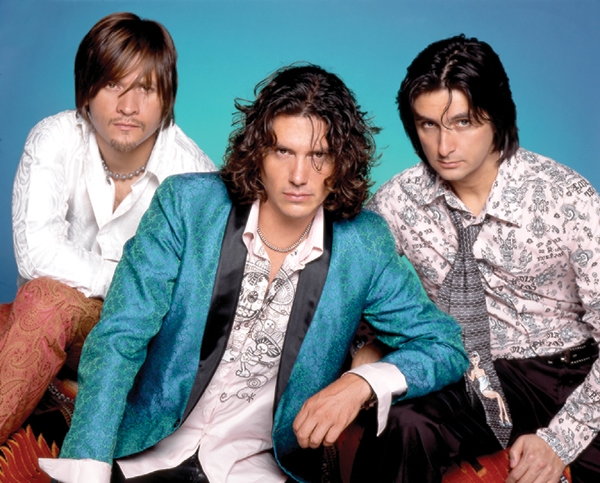 Mexican rock supergroup Jaguares announced new dates as part of their extensive U.S. tour, which has already seen sold-out dates in San Francisco, Denver, New York, and Las Vegas.  The band is touring in support of its recently-released studio album ‘Cronicas de un Laberinto’ (Sony/BMG). Jaguares recently returned to American television with a special performance on CBS “Late Late Show With Craig Ferguson.”  The group has been in the midst of a 30 city U.S. tour in which they are hitting many new markets for Latin rock, including such unlikely destinations as Oklahoma City and Memphis.

“I think that love created us, but it also can kill us,” says vocalist Saúl Hernandez.

“The song talks about the many loves – love of one’s country of one’s family, of the person you’re in a relationship with.  But in the end, there is just one love that kills you – that is the love you don’t have.”   According to Hernandez, the new album’s title ‘Cronicas de un Laberinto’ (“chronicles of a labyrinth”) is an analogy for the present state of Mexico, and on a larger scale, humanity.  “In our country, we are kind of lost, whether it be economics, politics, or society.  This idea of political change in Mexico is not working well.  We are in a labyrinth, walking on a road,” he says.

“They are still killing the Indians here.  The economic situation still primarily only benefits the wealthy.  We are lost – that is the image is of a labyrinth.  The first song on the album is about entering the labyrinth, while the end of the album is the hopeful exiting of the labyrinth – not depending on the government all the time, being responsible for ourselves, making a better country – be it Mexico, the United States, or any place.”

The new album has an increased emphasis on melody.  “With our previous studio album, we worked on a harder, more vintage guitar sound,” says Hernandez. “On this record, we were working on a different sonic idea – melodic guitar lines.  There were three guitar players – Adrian Belew, Cesar “Vampiro” Lopez, and myself.  We realized the best way to work together was to make an ensemble instead of emphasizing solos. When you hear it, you never know who is playing the guitar lines.  It’s one sound.”

Over the past three years, the Jaguares has appeared on Late Night With Conan O’Brien, Tonight Show w/Jay Leno & FOX Good Day NY, received a Grammy nomination, and landed its previous album Cuando La Sangre Galopa  in the top position on the Billboard Top Latin Albums & Heatseekers Sales Charts. The Jaguares found poetry in darkness, strength in musical mystery, and modern innovation in Mexican tradition. The group can play for 120,000 fans in the Zócalo of Mexico City one week, and then light up 31,000 more people in the United States.  Jaguares’ music when performed live is far more than a concert;  "it’s a communal ritual between thousands of singing strangers".  Candles are lit, priests take the stage, and in the space of a single evening, the concert becomes a holy rock-and-roll ceremony.