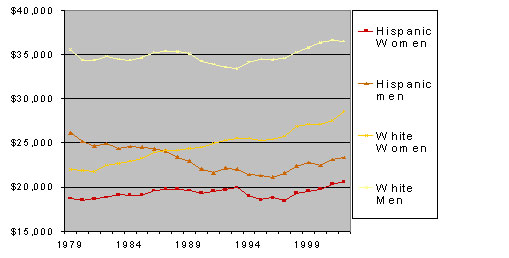 Santa Barbara, CA–(HISPANIC PR WIRE)–June 7, 2005–Hispanic women are a rapidly growing segment of the U.S. population, with especially large representation in younger age groups. By 2050, Hispanics are forecasted to comprise nearly one quarter of U.S. women, according to the HispanTelligence(R) research report “Hispanic Women in Profile 2005” released today by Hispanic Business Inc.

The data-rich report also reveals that native-born Hispanic women have higher educational attainment and average earnings than do foreign-born Hispanics, thereby narrowing the differences between Hispanics and national averages. While only 2.9 percent of Hispanic women have advanced degrees, the ones that do have higher average annual earnings ($58,623) than all women with advanced degrees ($50,756).

“From 1979 to 2002, Hispanic women gained a 10 percent increase in real earnings, increasing median annual earnings from $18,720 to $20,592. The wage gap, the difference in earnings between men and women, is smaller among Hispanics than whites. Hispanic women earn 88 percent of Hispanic men’s earnings, while white women earn only 78 percent of white men’s earnings,” stated the author of the study, Andrea Lehman, HispanTelligence(R) Business Economist.

Another interesting finding described in the report is that the number of firms owned by Hispanic women has increased by 63.9 percent between 1997 and 2004. The number has passed the half million mark with 553,618 Hispanic women-owned businesses in 2004.

What do these key findings mean for the future of Hispanic women? Hispanic women will have an increasing impact on the face of the U.S. economy that cannot be ignored – especially in entrepreneurial and small-business ventures.