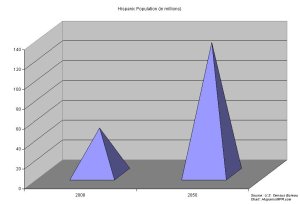 According to the latest U.S. Census data, black, Hispanic, and Asians under 20 years of age represent the majority or are near the majority in one of every four counties in the United States. Put another way, racial and ethnic minorities represent 43 percent of Americans under 20.

As of July 2007, Hispanics were the majority in 46 counties. All of the counties, save Seward, Kansas and Bronx, New York were in the South or the West, specifically Florida, Texas, Arizona, California, New Mexico and Washington.

Although population changes from July 1, 2007 were minor the update confirms the importance of America’s minorities which now represent one third of the overall population. Some speculate the aggregate of these market segments may constitute more than half of the population sooner than the date estimated by census staff, 2050. The population of the United States as of this writing is 304,870,304.